Vuelta a Espana: Roglic aims for historic success as Valverde has his last dance

Jonas Vingegaard stole the show at the Tour de France, but Jumbo-Visma team-mate Primoz Roglic will be the main man at the Vuelta a Espana.

Primoz Roglic will set out on a mission to create cycling history as the Slovenian gets his Vuelta a Espana campaign under way on Friday.

The 77th edition of the Grand Tour starts in Utrecht, with the opening three stages taking place across the Netherlands before the caravan transfers to Spain.

It is only the fourth time that the Vuelta has started outside of Spain, after doing so in Portugal in 1997, the Netherlands in 2009 and France in 2017.

Spanish riders have won 32 of the previous 76 editions, but not since 2014 has a Spaniard triumphed, when Alberto Contador tasted glory.

It is the longest wait for a Spaniard champion in the race's history, and in the last three years, it is Roglic who has dominated.

Meanwhile, Alejandro Valverde, the 2009 champion, will bid goodbye to his home Grand Tour. 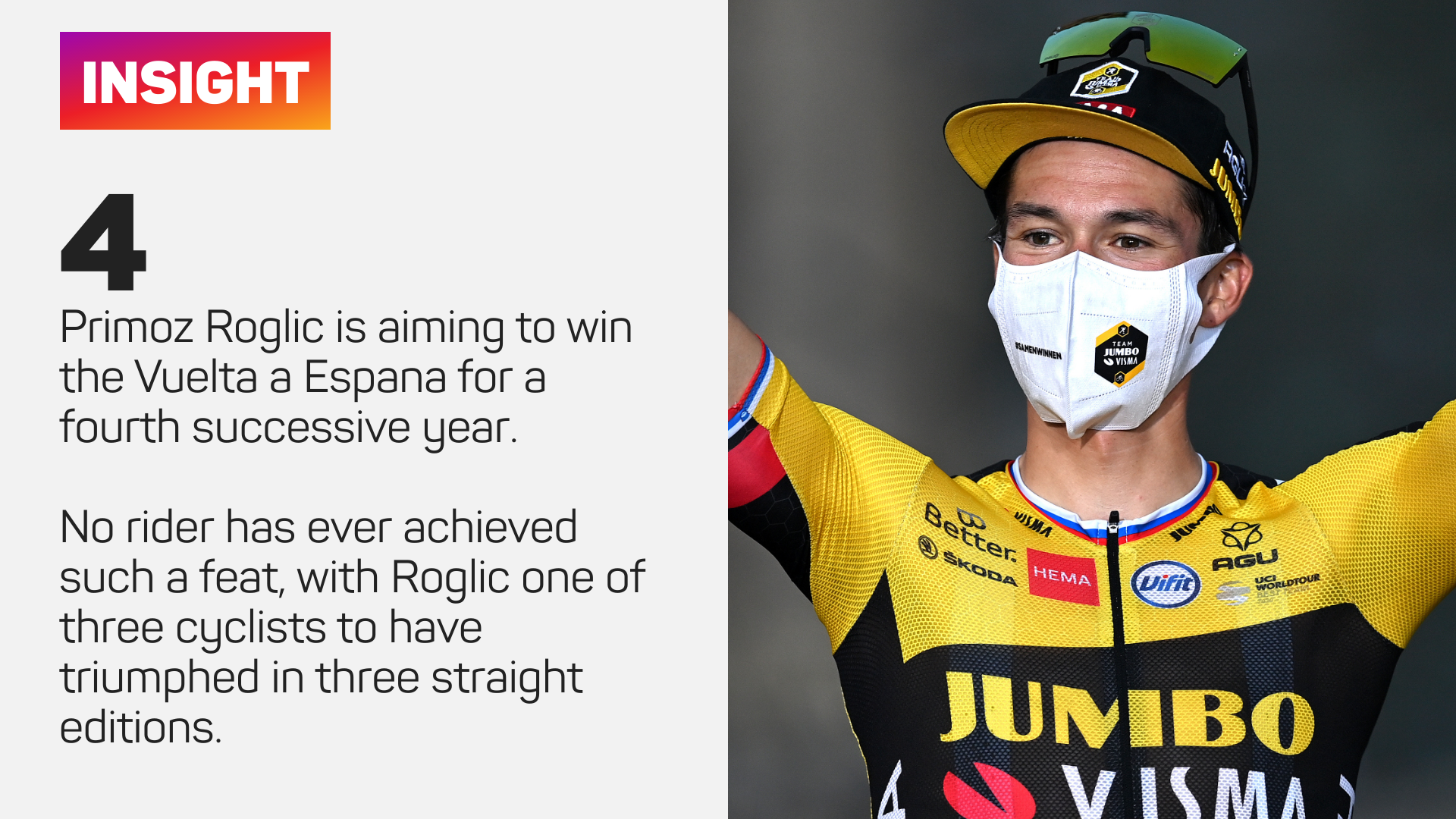 Roglic won his first Vuelta title in 2019 and successfully defended in 2020, despite his heartbreaking defeat to Tadej Pogacar at that year's Tour de France.

He crashed out of Le Tour in 2021 but bounced back in style, winning Olympic gold in Tokyo before clinching a third-straight Vuelta triumph to match the feats of Tony Rominger (1992 to 1994) and Roberto Heras (2003 to 2005).

Now, Roglic has history in his sights. Only Heras has won the Vuelta on four occasions, but no rider has ever won it over four successive years.

The 32-year-old Roglic's Tour de France again ended early this year, as he watched team-mate Jonas Vingegaard storm to success and set up a rivalry with Roglic's compatriot Pogacar that should enthral for years to come; but at the Vuelta, Roglic is Jumbo-Visma's main man.

Roglic has won the Vuelta in all of his three appearances, reaching nine stage wins in this period, more than any other rider (Fabio Jakobsen is the next best, with five to his name). He also claimed the points ranking in both 2019 and 2020, and could equal Erik Zabel (three) as joint-second on the all-time list for that classification, behind Sean Kelly, Valverde and Laurent Jalabert (four each).

"Of course the record gives me more motivation, it's special," said Roglic in a press conference on Thursday. "We're going to fight for that."

There are some concerns over his fitness after the injury he suffered at Le Tour, however.

Roglic said: "At certain moments I still feel some pain, but it is already much better than before. We'll see. If I get to the start here, it means I'm ready too. But I'll have to wait and see in the coming days and weeks to find out how it really goes."

Roglic could also feasibly set a record for the most stages wearing the red leader's jersey. He is currently level with Herras on 36, 12 behind Alex Zulle's haul of 48.

A last dance for Vuelta veterans?

Valverde, of Movistar, will be making his 16th Vuelta appearance. The 42-year-old has achieved more podium finishes in the general classification than any other rider, having done so on seven occasions, including his 2009 success.

If he completes the race, Valverde, who has won 12 individual stages at La Vuelta, will equal Federico Etxabe, Chente Garcia Acosta and Inigo Cuesta as riders who have finished the most times (14).

"To win a stage would be incredible," Valverde said on Thursday. "I don't believe I will be at the same level as the best during 21 days, but we do have a team-mate who can be among the top three or perhaps even win. What I see for myself is that I will try to win a stage."

Chris Froome, meanwhile, is a two-time Vuelta champion who is out to prove himself once more.

The seven-time Grand Tour winner has been struggling with COVID-19 in the build-up this time but is set to make his eighth appearance in the race, having finished on the podium four times, taking the 2011 and 2017 titles.

The first of those victories was only awarded to Froome in 2019 after original race winner Juan Jose Cobo was disqualified for a doping offence.

In a stellar career, Froome has become the first British rider to win all three of the biggest races in cycling. 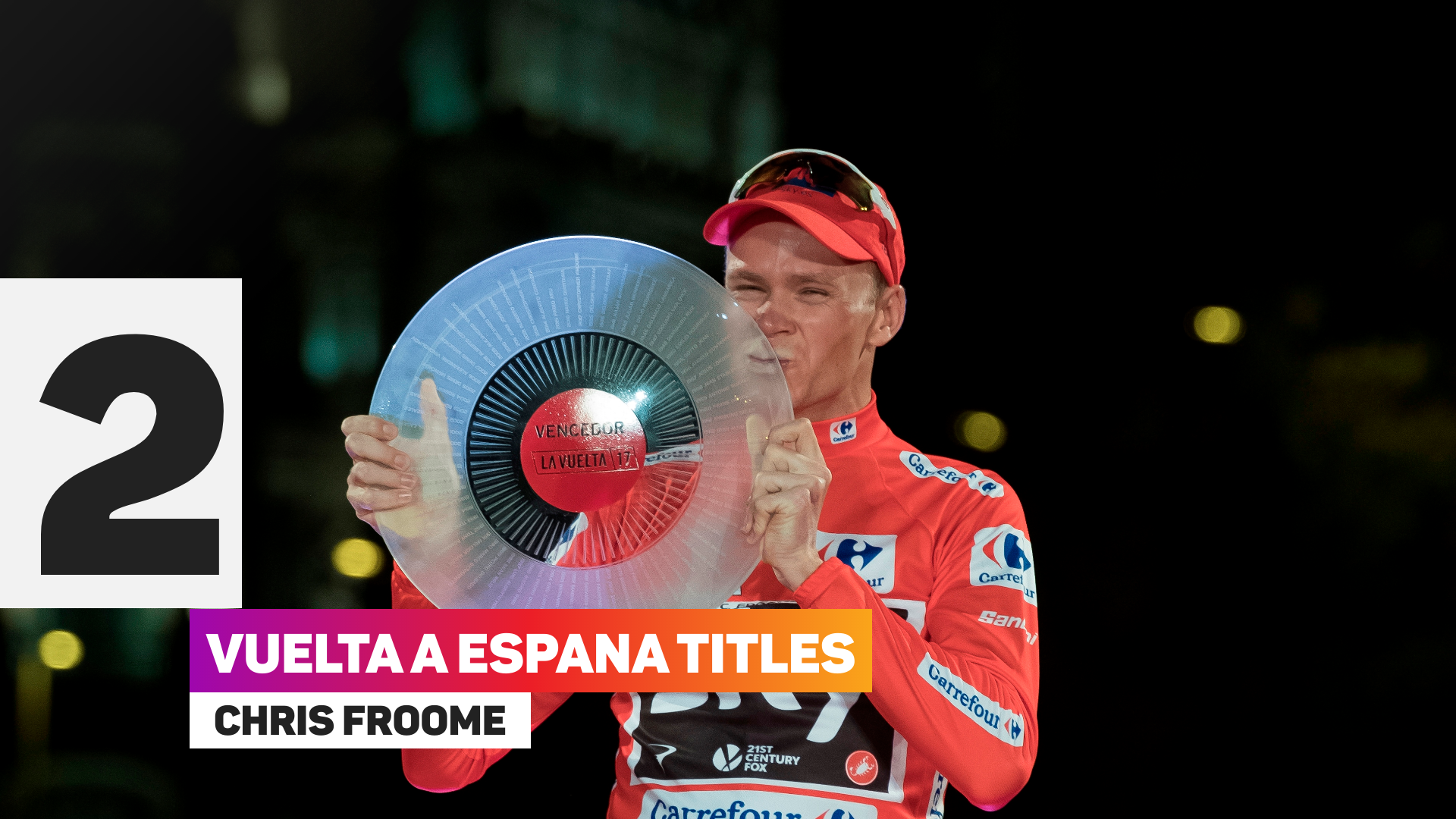 Good news for sports fans in Malaysia as beIN SPORTS CONNECT has been officially added to Astro's growing list of streaming service partners.

Team World won the Laver Cup for the first time after stunning their European counterparts 13-8 thanks to superb performances from Felix Auger-Aliassime and Frances Tiafoe.

Eliud Kipchoge set a new marathon world record after he crossed the line in Berlin on Sunday with a blistering time of 2:01.09.

Zii Jia to train with Axelsen, Antonsen before Denmark Open

Lee Zii Jia said he will train together with Danish stars Viktor Axelsen and Anders Antonsen ahead of the upcoming Denmark Open.

The Malaysian Games (SUKMA) final on Saturday is set to feature high quality action as some of the country's brightest prospects, including Ng Tze Yong and Tee Kai Wun, aim for gold in their respective disciplines.

While many feel that the ongoing Malaysian Games (SUKMA) should be a competition to unearth new stars, Leong Jun Hao said that quality participation of established national players would improve the tournament instead.

Retiring Federer to only play doubles at Laver Cup

The 2022 Laver Cup's first doubles match could be the final match of Roger Federer's professional career.